Home » Blog » How Many Social Sharing Buttons You Should Have?

How Many Social Sharing Buttons You Should Have?

Though social sharing buttons helps you to generate tons of traffic but it’s not always good for user experience.

Each social sharing button uses a piece of JavaScript code to make calls back and forth between the social network’s servers and your site. And if you are in WordPress using social sharing plugins then it also needs to load additional JavaScript files from an external source which is from the plugin supplier. So, the more buttons on your page, the more script the page needs to load. Ultimately which leads to longer page load time.

Page load speed should be a major concern for your website or blog because it has a direct effect on user experience and your website’s search engine rankings. According to a study by Akamai and Forrester Research, nearly half of web users expect a site to load in 2 seconds or less, and they tend to abandon a site that isn’t loaded within 3 seconds. Site speed is so important that even Google has included it as a ranking signal back in 2010.

Too Many Options Can Lead To Decision Paralysis

On one Saturday, she offered 24 flavors of jam, and on the other, 6 were available.

Now can you guess which display jams sold more?

So what this test mean to you?

This above case study also shows that your social sharing buttons are like mini calls-to-action; too many choices may confuse your readers into not sharing anything at all.

Neil’s study mainly focuses on blogs. But what about other websites? Such as landing pages or product pages and so on. So should you put social sharing buttons everywhere? 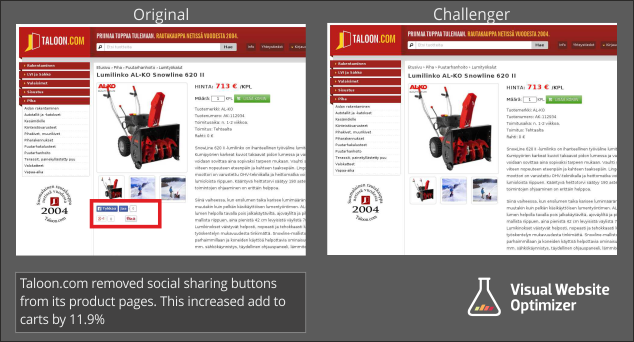 Taloon.com, a Finland-based hardware eCommerce store also managed to lift up their conversion rate by 11.9% just by removing the social sharing buttons from their product page. Read the full case study by Visual Website Optimizer here.

The above case study focuses on to two main factors:

How Pro’s Are Using It? 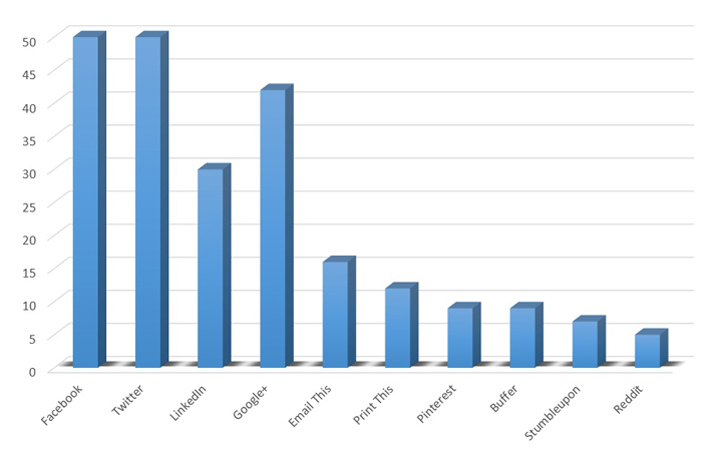 We’ve gone through top 50 news & internet marketing blogs and Facebook, Twitter, Google+ came out to be the most used social sharing buttons followed by LinkedIn. But on the other hand news sites tend to give more genuine options to it’s visitors with “Email This” and “Print This” facility. Pinterest, Buffer are most used by blogs.

Have you ever thought how many people actually click the tweet button in your website/blog? Joshua Benton from the Nieman Journalism Lab ran some numbers to figure out if social sharing buttons do any good to the publishers.

On an average, media sites receive over 15% of their tweet mentions from the tweet buttons embedded in their site, which drags a ton of traffic.

TrackMaven have also done some research and found that when it comes to sharing blog posts, the vast majority of social shares come from Facebook and Twitter. 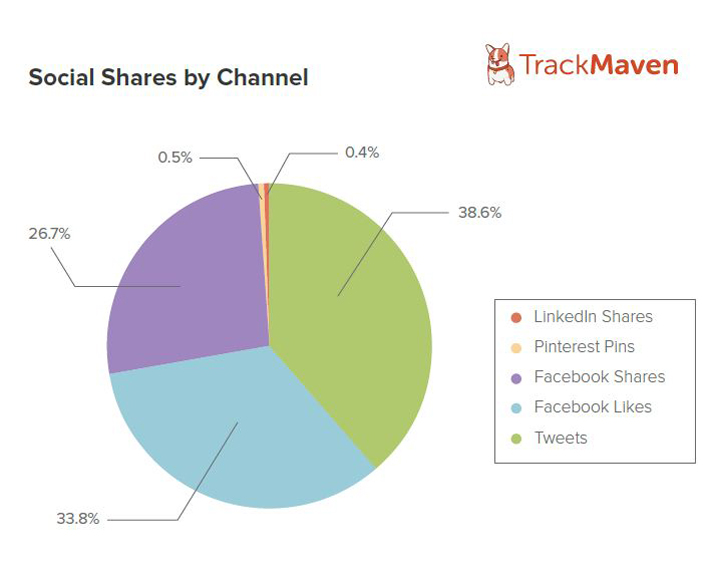 But even though LinkedIn and Pinterest both are not doing that good in the social sharing game, TrackMaven noticed that these are still important social networks for marketers. With 240 million active users LinkedIn isn’t that bad and holds a particular niche audience for the B2B marketers. Although Pinterest was found responsible for only 0.4% of total shares, it’s is still a powerful network for consumer and B2B marketers alike – according to a recent report from Connexity, 69% of online consumers who are on Pinterest found an item they’ve purchased or wanted to purchase compared to only 40% of online consumers who visit Facebook.

The Referral traffic data will show you from where are your visitors coming from on a consistent basis (exclude the one-hit wonder outliers). From the demographics data you will come to know which networks are your users playground or where they more likely to be on (more women are on Pinterest, B2B professionals are on LinkedIn, etc.).

Now if you see your visitors are coming from a particular network where you’re not present or less active then you should be more prominent and active on that network. And if you are already present and rolling in that particular network then you should probably start thinking of doubling your activity. Ultimately you have to be where your readers are and you have to provide them the social sharing buttons which is right for them, without confusing them with too many options which will lead to not sharing at all.

So don’t just add whatever’s offered to you in the plugin. Choose your buttons wisely. Test, optimize and make sure you make those buttons work for you.

Have you ever been on a site where you clicked the share button and you had to go through all the unrelated images until you find the perfect image associated with the article? Remember that irritating moment and don’t let the same happen to your audience. Have complete control over how your content gets shared through Facebook’s Open Graph Protocol, Twitter Cards and Pinterest Rich Pins. These Meta tag options let you to control and optimize how your content appears in a user’s feed or timeline.

Another integral part of social media sharing button optimization is to make sure each plugin or button is customized to best fit your site.

There are plenty of factors that shows how many social interactions your website will get. So, before you make any huge changes to your website/blog, first establish a goal and then test your results.

So, what social media buttons do you use on your website? Which social networks did work well for you? Leave your thoughts and suggestions in the comments section below – would love to hear from you.